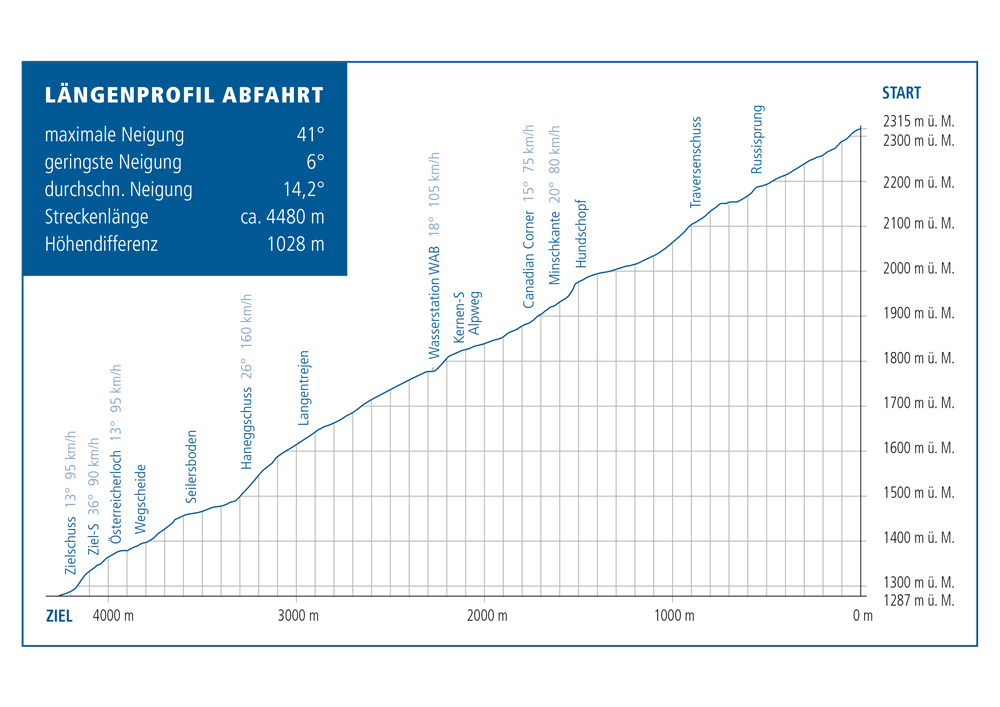 ⇒ Records on the Course

Certainly the numerous challenging and crucial parts of the run: In order to win the Lauberhorn Race the skiers not only need a lot of courage and be prepared to take risks, but also perfect technique and stamina.

Russisprung
This jump was neither a project nor an idea. One spring Bernhard Russi was in search of a suitable jump for making a film on technique for a television channel. He found the foundations of the jump on the Lauberhorn ridge and had it built up with a large quantity of snow. Before the next race Fredy Fuchs decided to integrate it into the run and call it the “Russi Jump”.

Traversenschuss
Within 5 seconds the speed increases from 100 to 130 km/h. At the beginning the schuss is slightly curvy and then, past the AK start, is scattered with many waves. The challenge lies in the aerodynamics, the racer’s low position and the perfect line through the rough left-hand corner into the traverse and on to the first intermediate time.

Hundschopf
The actual symbol for the Lauberhorn Race. The tight, rocky passage appears like an impassable spot which cannot be negotiated: too narrow, too steep and the landing area too short and hard. On the Hundschopf there’s fine line between courage and respect, risk and tactics, jumping technique and choice of route. Within the shortest of spaces the most demanding elements for the skier come together. The corners above are more than usually tight and between the rocks on the left and the safety net on the right there are 5 meters at the most. The edge of the jump can only be estimated and the route is determined by the end of the net and the power of the skier’s imagination. Followed by the bottomless!

Minschkante
An intriguing combination of jump, corner, choice of route and the greatest challenge for the skier. Depending on speed, this right-hand bend can be taken with either a wider or tighter radius. Finding the ideal speed determines whether there is sufficient landing space before the compression. Joos Minsch is by no means the only, though one of the first prominent victims, who were thrown off the run here. In 1965 during the first training the man from the Grisons was keen to show prove his strength right from the start. However, bad weather conditions meant that the race was started at the Hundschopf. Despite this, or maybe because of this, Joos Minsch risked too much, flew too far and fell on landing. Nothing could stop the fall which only ended down at the railway track. The result: A broken pelvis, 9 weeks in hospital, end of the season and the naming of this demanding and crucial part of the race.

Alpweg with Kernen-S
At a speed of over 100km/h along a 3 meter-wide Alpweg, the net on the side of which makes it seem like a channel and then on to the craziest shicane in the World Cup circuit. A tight right-left-corner over the bridge slows the skier down to a critical speed of 70 – 80 km/h which he must keep for the next 20 seconds. Bruno Kernen, the winner in 2003, smashed backwards into the net in a hair-raising manner and was catapulted back onto the slope. The slightly cautious approach at the beginning of the right-hand bend not only serves to maintain an optimal speed, but also reduces the danger of a fall.

Water Station
After the Hundschopf and the Alpweg, at the Water Station the trilogy of crazy passages on the Lauberhorn reaches a first highpoint. This bottle-neck is not only breath-taking for those watching from a passing train, but also fills the racers themselves with awe on first inspection of the run. At a speed of 90 to 100 km/h they race through this tight passage which, at a width of 9 meters is so narrow and low that no one dares to enter the dark hole standing up.

Langentrejen
The unrewarding part of the race! Here the race can be won or lost. The flat section with the gradual changes in direction gives the skier time to take stock, first signs of tiredness become apparent and, whilst gliding, all the attention is focused on the skis: are they nice and flat, are the edges too aggressive, are they accelerating?

Hanneggschuss
It is steep, long and dark and demands more than just a bit of courage from the racers. In the middle of the Schuss, when the skis start to sway and only make contact with the snow every 10 meters and, contrary to expectation the slope doesn’t widen at the bottom of the dark compression, then the downhiller’s heart comes into its own. Then the real specialists make themselves smaller, more aerodynamic and increase their maximum speed to 140 km/h. The danger has to be - and can be - overcome.

Seilersboden
A brief moment of calm. Here on this short, flat stretch you can catch your breath. After the “crescendo” in the Hanneggschuss, in the flat left-hand turn one’s attention has to turn to finding the correct pressure and speed.

Silberhorn Jump
The newly-created jump from the year 2003 was the subject of fascinating TV pictures with the Silberhorn mountain in the background. In a gentle right-hand turn the skiers can let centrifugal force and flight take control. As a result the bumpy Wegscheide took on a new character and the last minute & rather late foundation of the Silberhorn club gave it its new name. The sole member of honour is Bruno Kernen, the winner at the time.

Austrian Hole/Wegscheide
The legend now only lives on in the name. In 1954 one after the other the Austrian favourites Toni Sailer, Anderl Molterer and Walter Schuster ended the race prematurely, thrown out by three shortly-spaced humps. These treacherous waves no longer exist and the Austrians hence have one rival less.

Finish – S
Just there where all the big races have finished, on the Lauberhorn there follows a single, technically very demanding crucial passage that can completely change the rankings. The skier is tired, can quickly prepare himself and take stock again. He notices the spectators, might even hear the speaker. He knows that all can be lost here, or that he might win those vital seconds that lead to victory. For most though, after 2 minutes on the track, it’s all about survival. Some suddenly change their tactics again and alter a planned route because of sudden tiredness or because they no longer have the patience or nerves. The 3 sharp corners are usually icy and bumpy, made worse by the natural contours of the land.

Finish Schuss
The Finish Schuss - and the cusp belonging to it - is the sum of the happenings in the Finish-S. Here, from unproblematic passage to fall and acrobatics, everything is possible. However, no one negotiates this final hurdle with energy to spare. The finishing line is within sight, it’s just the most direct route that counts. The finish jump has been made slightly tamer but therefore requires the necessary concentration.
Finish

The finish
The finish is where the skier comes to a halt”. Nowhere is this as true as on the Lauberhorn. After a descent of about two and a half minutes, rising out of the low crouch at 100 km/h and the braking manoeuvre within 100 meters become the final challenge of the course. Those who see the finish in Innerwengen for the first time will have no further doubt that the Lauberhorn Race has its very own special character. Where the surrounding mountains dominate with their size, beauty and danger, it is understandable that the great stories of this region take place in a certain feeling of security.